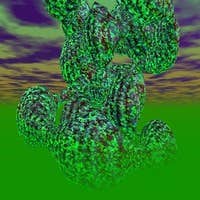 the old song from 1993 mixed with tonites work on c-sound. :) just tooling about in c-sound. Q thing.

someone comment on the drift at the end of this.. my reply is thus — that drift was made in 1993 when I after I think I had an mac two as well and I probably made a video at some point onto vhs with the quadra 660 av machine.. s-video out back then.. It is from a time when I had been making the 6hr vhs videos with 6hr music performance works.. a fun period of life.. for me..— I recording the c-sound sounds by using audacity to record the main outputs of my computer directly then chopped up that into three parts left right center .. the two parts of the korg Poly 6-1 was forward and one reverse one left one right.

He Breaking Light.. :) I had to look up the musique concrete?

From Wikipedia, the free encyclopedia

Musique concrète (French: [myzik kɔ̃kʁɛt]; lit. “concrete music”)[nb 1] is a type of music composition that utilizes recorded sounds as raw material (Editors 1998). Sounds are often modified through the application of audio effects and tape manipulation techniques, and may be assembled into a form of montage (Editors 1998). It can feature sounds derived from recordings of musical instruments, the human voice, and the natural environment as well as those created using synthesizers and computer-based digital signal processing. Compositions in this idiom are not restricted to the normal musical rules of melody, harmony, rhythm, metre, and so on. It exploits acousmatic listening, meaning sound identities can often be intentionally obscured or appear unconnected to their source cause.

The theoretical basis of musique concrète as a compositional practice was developed by French composer Pierre Schaeffer beginning in the early 1940s, and originally contrasted with “pure” elektronische Musik (based solely on the use of electronically produced sounds rather than recorded sounds). Schaefer’s work resulted in the establishment of France’s Groupe de Recherches de Musique Concrète (GRMC), which attracted important figures including Pierre Henry, Luc Ferrari, Pierre Boulez, Karlheinz Stockhausen, Edgar Varèse, and Iannis Xenakis. From the late 1960s onward, and particularly in France, the term acousmatic music (musique acousmatique) started to be used in reference to fixed media compositions that utilized both musique concrète based techniques and live sound spatialisation.

wow I never looked that far into the various styles of music .. just what I was doing about.. thanks for the comment Breaking Light *Kävin