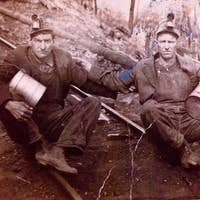 The lyrics of this song,
as they pertain to plot,
are my exact memory of the event.

I had spoken to the kid maybe a minute before the “action” started about how the pressure of the water was very strong. He was nestled down with his back to the current.

Seconds later, he floated past me and uttered that word. People gathered on the bank as I struggled to help him get to the shore.
Seeming not to realize that the child and I were on the brink of sinking and being swept on down the river.

I did yell to those gathered on the bank,
“I need some help here.”
Where upon someone grabbed the kid and I got myself to safety.

I never saw the child after that or heard
who or heard who or how he was.

He said, “Help,” as he flowed down with the water
Not a scream. Just that word and not much louder
Just a statement. Not a shout. He held his chin up like an otter.

Am - I got sunflowers and tomatoes, caster beans and summer squash
Em - I got roses piled with coffee grounds, but this summer is a wash
Am - There’s lightning and there’s thunder sparking ‘cross the dusty plain
C B7 - I love the distant fireworks but what I really need is rain

He said, “Help.” Not like he’s dying
He said, “Help,” and it was me that he was eyeing
Our time had come, there’s no denying. Like a puppy’s gentle crying

Am - We were meant to meet that day bobbing in the current.
Em - You can’t hold destiny at bay when you’re stripped of all deterrents
Am - And the memory will replay, that River Scene recurrent…

He said, “Help.” People standing there just talking
On the shore. Drinking beer and gawking
Smoking cigarettes and laughing. All the fun that they were having

He said, “Help,” as he felt the River’s power
He said, “Help, help me delay my final hour
Tho unspoken, he could sense it. You can buy but no one rents it

He said, “Help.” He was someone’s little brother.
He said, “Help,” and somewhere he had a mother
And where I this child’s father as I splash across the water?

He said, “Help.” I said, “Son, don’t stop trying.
He was silent as I shoved him toward the shoreline
All the people standing there. I said,
“Do something. Don’t just stare!”
I said, “Help!”

(One of) 2 songs that make me tear up just hearing the song title. JMT’s the most gifted song writer I know! Kathy Holdway

Heck, so I just went to iTunes and bought the album.

Thanks for pointing me to this link! This song grabbed me the first time I heard it and hasn't let go.

tha lyrics are as strong as tha current, you sing about... c):~)

One of my all time favorites of yours. Richard always asks fir this one and hickory sticks. Goldyn