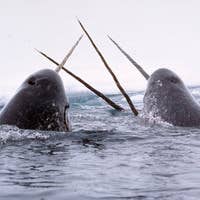 Monodons were born in 2001 when Dave and Johnny were playing with the tape deck waiting for the bass player to turn up for rehersal. At the time, when these recordings were originally made, we were decided to call ourselves Narwhal. In the intervening years someone else started using that name. We decided to let them keep the name since we never did much with it. Now, all these years later, we are finally releasing these records from the depths of the bottomless tape vault under the moniker Monodons.