Back to skiks/bruce hamilton's profile 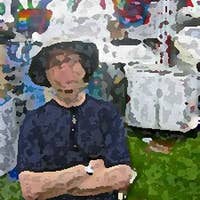 Body Disconnected (2002) was written to accompany choreography by Lauren Lutrell. The process included importing video clips of dance movements into the music programs I was using and scoring music to them as one might with a film soundtrack. In many cases I attempted to synchronize visual and musical events, which created an interesting challenge with regard to musical pacing. There are a few basic musical ideas here: interlocking pulses vs. chaotic outbursts, persistent drones, and a recurring high melody that, along with the underlying pulse, ties the five main sections of the work together. Sound sources include samples of metal bowls, bells, and a thumb piano; and a variety of synthesized sounds, which were edited, arranged, and mixed at the Western Washington University Electroacoustic Music Studio (WWEAMS).

This is a beautiful work. The various sections are interesting in themselves but I also love how you've blended them together, the changes work really well. Bravo!