you guys are a great band. really technically impressive. and your songwriter has a real catchy genius.

i washed dishes in a busy restaurant last night, boy do i wish they were pumpin your shiz instead of blasting me with guns and roses all night long.

The organ kicks ass. Tip of the hat gents. 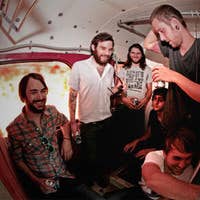 Hooves are a rock nâ€™ roll band. In a traditional sense, you know, with overdriven tube amps and swaggering bravado, with vodka dripping watermelons and cigarette stained fingernails, bad attitudes and hearts of gold. The kind of band you imagine living on some destitute farm, or downtown, in the various historical districts of Phoenix. Places they lived and shared, attacked one another and engaged in furious bear hugs. Hooves donâ€™t make music for the self-consciously cool. They donâ€™t do it for the money, nor are they opposed to being showered with it. They donâ€™t do it for any other reason than joy, the kind of joy derived from those American ideals of Truth, Freedom and Volume, dusty black Levis and BBQ. It wonâ€™t help to read more much about it, so perhaps put the CD in the player and press play. Donâ€™t say I didnâ€™t ask nicely.