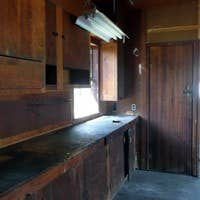 The House on Layton Way

The realtors always disliked showing the old Victorian house on Layton Way. It gave them a creepy, clammy feeling. Especially in the basement where mad whispers and the sound of metal working off in the distance could sometimes be almost heard or rather felt down the spine. And worse yet for some strange reason the house was listed at least every other year if not sooner as family after family decided to move on. They were always quiet but anxious to sell even at a loss.

The House on Layton Way featuring Steve Layton whose derivation you hear.

The music is quite fitting in consideration of the description of the house for which this sound file is named -- and I love it! I enjoy a creepy, haunting recording when handled with taste and mix down mastery, as evident here. Truly enjoyed every spooky second, especially when the voice came in!