Where is Everybody?
vaisvil
7:59

A simple ballad played by a band consisting of myself and my clones. Guitars, bass, drums, vocals - all performed.
Uploaded February 7, 2020 1:46am
View more…
11
0
edit mark as spam
view all

This started as a test for a removable piezo pickup I got for my baritone ukulele. I was using my current Pure Data looping and oscillator patch and continued layering 6 loops off my first test and got into the groove. I added in two oscillators…read more
Uploaded February 15, 2020 7:08pm
View more…
16
0
edit mark as spam
Voice Training
vaisvil
3:25

A little birthday uke ditty, bookended by two improvs So this is year 61 Made it this far Let’s have some fun Keep looking forward don’t look back Time has a way of keeping track Of joy and pain We all live for love Sun or rain This…read more
Uploaded February 13, 2020 1:49am
View more…
20
1
edit mark as spam
RepeatingFuture
erocnet
5:01

Where is Everybody?
vaisvil
7:59

Nice scratching till that subsides to clear water.. I am glad you were able to do something with the metronome beeping it’s something that I have difficulty with... I always turn it off,,, when I forget,, I am really confused as my personal personality like drummer has his own kinda abstract timing that usually conflicts with anything organized like say regular beats...

I see three. 7 minute sectioned parts layered setting to left right center... in the next edit of this? What do you think Chris?

parrot and voice training is .. so intertwined from like so so long ago --- 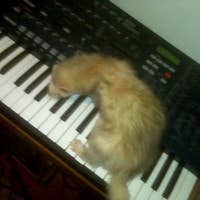 The question of how microtonality is perceived and why is a hotly debated one. There seems to be, in general, but not in all cases, shared intervals around the world, like the 5th. However non-western cultures use, in general, microtonal tunings. 12 equal notes to an octave is a relatively recent invention in the west. 300 years ago it was common for what would be now called a microtonal tuning to be in common, everyday use. As best as can be determined the push for 12 equal was all about changing keys in a single piece of music. If you take the tuning of the middle ages, Pythagorean, you find you can’t play in any key despite having 12 notes because the intervals between the notes are not equally spaced. As a result when you take a pure chord and move it up or down the octave with the same distance between the notes it could become something hideous. 12 Equal solves that problem at the expense of detuning all notes, some more than others.

from I think it would be a good idea. Mahatma Gandhi, when asked what he thought of Western civilization, AQ