This was an RPM track back in the day, and I've been playing it various ways to find a setting for it within the band repertoire. This doesn't sound much like our band would do it but it came out nicely, so i thought i'd share it.
Uploaded October 8, 2012 10:37pm
View more…
105
8
edit mark as spam
Breaking Arrows (elusive gene cover with Alex Moody)
Gumbo
2:27

Sassy Nation version! Sister Savage and Mr Sandbags collaborated on the original of this wonderful heartbreaker of a song. I've been playing it on the guitar the last few days and it always seemed to come out with a grittier tone, so i asked…read more
Uploaded March 6, 2011 4:04pm
View more…
263
16
edit mark as spam
Where I Was Grown v2
Gumbo
3:10

Final Version If in doubt write more songs with Kazoo solo! and heckling! this is as close as i got to some hokum jug band
Uploaded February 28, 2011 4:33pm
View more…
141
8
edit mark as spam
Day Of Rest
Gumbo
3:41

Final version Day 28 Anyone else still writing songs? this is the result of trying to listen to too many mixes in one day. Sometimes it's just easier to record something else.
Uploaded February 28, 2011 1:02pm
View more…
129
9
edit mark as spam
view all

The somewhat hesitant yet still compelling story of how a two-bit grifter by the name of Jack Merlot was working late into the evening one night, practicing his walking-stick-like bass lines on a dreadnought guitaron, when, much to his surprise…read more
Uploaded December 17, 2016 10:09pm
View more…
16
0
edit mark as spam
Bunny Hop Dancers
World War Nine
7:31

This composition is an extension of my goal to evolve musically by working on each part of the music individually. I'm still seeing what works / doesn't work, it's hard out here for a pimp. In any case, I'm getting a hella much better at…read more
Uploaded June 8, 2017 9:19am
View more…
7
0
edit mark as spam
Holy Roller Ice Queen
World War Nine
4:13

Everyone probably knows the Holy Roller Ice Queen this song was inspired by. She's majorly bipolar, it's either the greatest moment in the history of humankind or a blowout disaster than even Superman couldn't fix. I accept both the credit…
Uploaded December 30, 2017 12:16pm
View more…
16
0
edit mark as spam
view all

Most Listened To Tracks

this is the slightly sparkly version of my version of Moschell's "Boxes and Strings" from his 'Circus of Freaks and Fools' RPM Challenge CD. I recorded it as a video last night and redid it in the studio (unfinished sauna) today.
Uploaded March 15, 2009 10:58pm
View more…
507
6
edit mark as spam
Give Up Yer Gold (Pirate Song)
Gumbo
4:12

An old time fiddle tune without the fiddle, or the tune, really, so the vocal has to carry it, and it has that lovely raw propulsion. Written and recorded in an hour.
Uploaded March 9, 2009 12:43am
View more…
369
5
edit mark as spam
Blind In One Eye
Gumbo
2:21

Those stark Moonlit nights have something of a reputation, but there are other things lurking in the moonlight.
Uploaded March 9, 2009 12:43am
View more…
231
3
edit mark as spam

Hey, where did the video go? Giving this album a whirl again - still one of my faves.

Written today. recorded on an iMac with the internal mic and no headphones (!) so it's probably going to be muddy as hell, but that feels about right for now. LYRIC: Fill up the glass, Bartender Ply your art Quench the fire in here, now…read more
Uploaded April 27, 2009 11:41am
View more…
145
6
edit mark as spam

@Crossroads @jackmerlot: Hello? I think I'm in the right place, but there is nobody around right now? @raven: Caw! Never-more. @jackmerlot: Well a fat lot of good you are. Can you say anything else, or are you one of those greasy, diseased birds with no conscience? @raven: Kra-Kaw! Never-more...never-mind...he's here! @mingus: And I suppose you're wondering what you'd do, for a lifetime subscription to Ernie Ball's Bass Strings of the Month club, &amp; a signed copy of the Black Saint &amp; the Sinner Lady? @jackmerlot: Hey, wait a minute. A guy that kinda looked like you gave me this card. *pulls out business card, printed on heavy bond stock with slightly raised monogram letterpress printed on it* @mingus: Ah, uh, yeah. I mean, Ah Um. @raven: Kraaaakkow! RED-RUM! @jackmerlot: Hey, thanks a lot for meeting me, but you're not actually the guy I meant to meet here. @woodyguthrie: May I help you? He's standing in a State Fair Kissing Booth about 20 yards from @crossroads. Do you wish to trade business cards with Woody Guthrie? ( y/n )

Cave Street posted a track recently, their contribution to the Woody Guthrie Project, organised by Akron Family. http://akronfamily.com/woodyproject/W.G.A..html I wanted to take a shot at this too, so here's my demo. It was really just half…read more
Uploaded March 3, 2010 9:40pm
View more…
151
10
edit mark as spam

Aww, man. My cousin's youngest just turned one; his name is Arlo. I never axed my cousin if they named him after Arlo Guthrie, but I guess in the back of my mind I always assumed they probably considered that when they named him. "This Machine Kills... Fascists." written in Sharpie marker on Woody Guthrie's acoustic guitar. 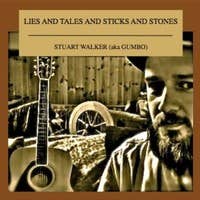 Gumbo was born in New Orleans on July 4th 1900 and died in 1964 in Memphis after hearing The Beatles for the first time. He re-incarnated a few days later in an obscure region of North West Europe, and he’s been trying to make sense of those few days ever since.

He still makes born-again banjoe music on the guitar, and JuJu sandwiches. He was recently re-united with his cousins, The McCoys, who live in the hills of Co Clare. Not literally of course. They actually live on the hills.

from The Windy West of Ireland